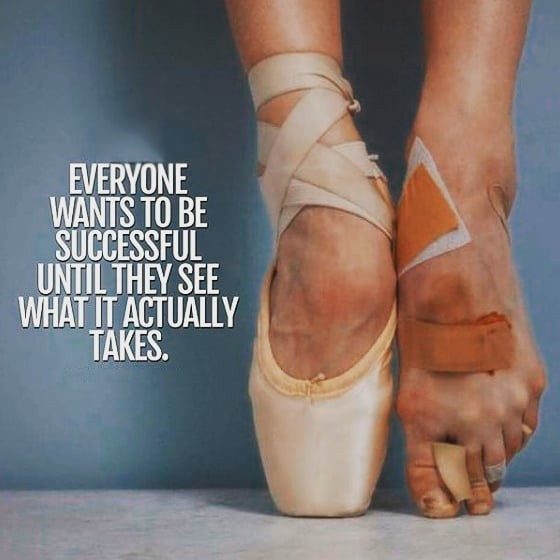 Are You Prepared To Do What It Takes

The graphic above came across my social media feed today. And its effect on me was instant. Let me explain that, because I believe it’s important for some to hear. We often look at the most successful among us and wonder what makes them different. They appear to have the same education, similar work experience, and at the surface it’s easy to believe we deserve the same success. There’s certainly no shortage of business stories that can be distilled to the same single lesson—if you want it, work for it. But another reminder never hurts, because sometimes we have to ask ourselves if we are working hard enough to achieve our own business goals.

When I was a little girl my grandmother took me to ballet lessons several days a week in Manhattan. We took the train into the city from Queens after school. It was pitch black most nights by the time we took the train home. I did my homework, ate a snack on the train, and once saw a woman get mugged right in front of me. It was an almost daily sacrifice year- round, including weekends. My grandmother was a prima ballerina in Hungary with the Metropolitan Opera, before WWII. Dancing was her first love, and she arranged for her Maestro, who choreographed and directed her in Budapest, to come out of retirement and teach me, after learning he too was in New York.

Turns out I was blessed with her abilities. He came out of retirement because he said I had a gift. The Maestro, as he required me to call him, and my grandmother still did, was a stern instructor who demanded hard work, disallowed complaints, and praised sparingly. He was the very definition of a perfectionist, but he had proven time and again to turn out some of the best dancers in the industry and no one dared question his expectations. After years of working with him, he sat my grandparents down and told them I needed to make a decision. And he believed I already had. He told my grandmother, “She’s incredibly gifted, and capable of everything in front of her. But she does not want it like you did.” He said I must want it if we were to continue, or nothing would come of it and it would be a waste of time for us both. My grandmother was heartsick over my decision not to continue.

She has been gone for more than a decade now, her passing coinciding with the start of my first big marketing job on the founding team of Massage Envy—the one that would help me establish myself in time as an expert in the franchise marketing field. I believe my grandmother would be incredibly proud of the things I have accomplished since, but in that moment Maestro delivered the news to her, I don’t think anything I had ever done had brought her more disappointment.

For weeks leading up to my decision to quit ballet, she told me that when she danced, she danced so hard that her feet bled through the lambswool and bandages beneath her toe shoes. That unless I was dancing so hard that my toes would bleed, I wasn’t working hard enough. She was generally not a harsh woman, but she wasn’t much for mincing words, either. To be honest, that was the moment I made my decision continuing ballet wasn’t for me. I simply wasn’t willing to do the work. I knew it the moment those words left her lips. And I was reminded once more when the graphic came across my feed.

While in that moment many years ago that decision seemed relegated only to dance, I owe my career success to working harder, and wanting it more than most. It is true that everyone wants success, but few are willing to bleed for their dreams. If you haven’t yet achieved the things you wish for in life, perhaps you aren’t doing absolutely everything it takes to get there. Not everyone will tell you that. They will be supportive and commend you for all you have done thus far. Some will do it out of adoration for you, but most simply don’t know what it really takes. And if they did, they might not venture down the same path. The question is, Will You?

GETTING READY TO FRANCHISE

A great concept can be made even better through franchising...

Not saying we play favorites, but if w did, we’d save a seat up at...

You’ve been around the track a few times. Maybe you need...